China continues to lead the Asia-Pacific region in the new deliveries. Over the next 20 years, Chinese airlines will require nearly 6,000 new aircraft worth $ 780 billion , representing more than 40 percent of scheduled deliveries in the Asia -Pacific region.

Continued growth With GDP expected to grow 6.4 percent per year over the next 20 years, China's share of global GDP is expected to grow 8.5 percent today to 16 percent in 2032. As Chinese incomes converge towards those historical industrialized countries, a growing middle class will be expected to have a level of lifestyles and consumption comparable . Air traffic continues to be robust. In 2012, traffic from and to China increased by 10.6 percent, according to the CAAC .

Domestic traffic accounted for 78 percent of total international 20 percent, and the remaining 2 per cent was in Hong Kong , Macao and Taiwan. Over the next 20 years, international travel will grow faster than domestic travel , increasing at an annual rate of 7.2 percent compared to 6.8 percent for domestic travel. Airports in China are rising in rank for shipments and total landings , with Beijing at number 2 in the world , Hong Kong 10 , 19 Guangzhou and Shanghai to 20. Hong Kong ranked as the number 1 cargo airport in terms of metric tons , with 3 Shanghai , Beijing at 14, 21 and Guangzhou . Request tickets As in other parts of the world, single aisle , like 737-800 and the new 737 MAX 8, are the mainstay of the Chinese fleet and will continue to be over time . 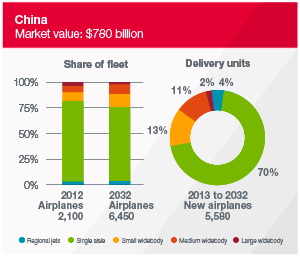 Today there are more than 1,650 single-aisle aircraft in service and a backlog of nearly 700 aircraft with airlines and lessors. In the future , China will need 3,900 new aircraft with single aisle aircraft, representing 70 percent of the new deliveries. With the rapid growth in international travel , airlines in the region will 1,440 new large aircraft . The number of new long-haul international markets has increased 135 percent over the past 10 years, with eight new stores opened in 2012 only markets. Airlines continue to seek opportunities to expand their international networks increases flight secondary cities outside Beijing , Shanghai and Guangzhou . Long-haul services currently operates Chengdu , Hangzhou , Xiamen , Chongqing , Sanya , Nanjing , Shenyang , and with the growth trend is expected to continue .